Engine combustion is a complex process. It takes place in complicated three dimensional geometry, is -- inherently -- three-dimensional and highly transient, takes place in turbulent flow, often involves liquid fuel thus giving -- in certain regions of the engine -- rise to two-phase flow, takes place with strong mixing of reactants and is characterized by violently insettig chemical reaction followed by complex combustion, is influenced by the presence of walls and hence takes place in a non-adiabatic system...

As a consequence of this complexity, engine combustion can not be simulated as a whole. Instead, different simulation approaches focus on different aspects of this complex and complicated process.

Cosilab focuses on the effects of combustion chemistry on engine performance which, simultaneously, allows the knocking tendency of a certain fuel or fuel composition to be predicted. In addition, for any fuel composition, nondimensional numbers such as methane, cetane or octane number can be calculated from Cosilab's computational results.

As one example, shown in the following figure is the evolution in the cylinder of an engine (rapid compression machine, i.e., no forced ignition) of a liquid mixture of 16 and 2/3 % octane, 66 and 2/3 % heptane and 16 and 2/3 % toluene, in the crank-angle range from -141 to +142 degrees. The oxidizer was air, and the equivalence ratio was 1.1. Specifically, shown are the histories of temperature and pressure, and of the molefractions of CH4 and H. In this calculation, heat transfer to the cylinder wall was not taken into account. Under the conditions selected, autoignition is seen to occur at a crank angle of approximately -52 degrees, i.e., well before TDC. 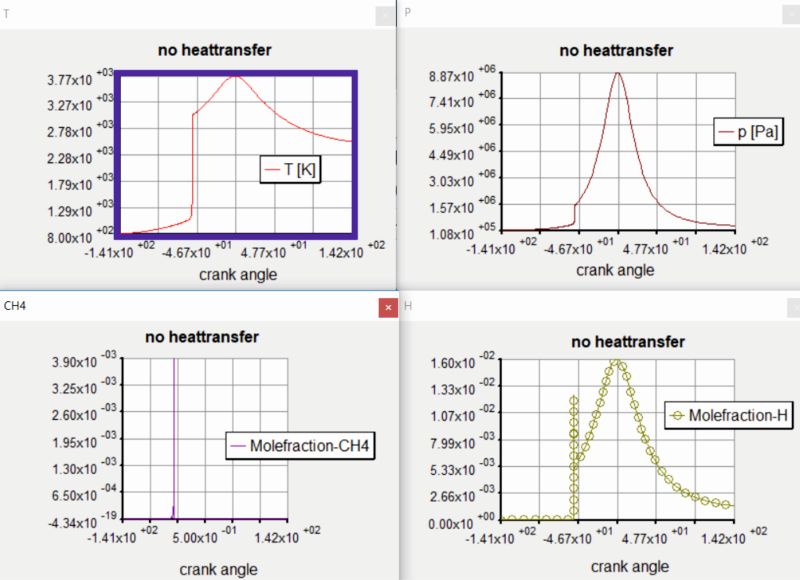